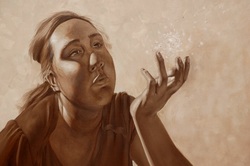 Jennifer Jeane Salas grew up in gold country, Placerville, California.  She signs her artwork "Jeane," also the given middle name of her grandmother.  Growing up in the foothills of the Sierra Nevada  Jeane was constantly surrounded by art in the form of her mother, sisters, grandmother and aunts.   Middle school and high school were spent enjoying  after school art  programs that allowed Jeane to experiment in many different mediums.

Travels to and from the Pacific Coast, Sierra Mountains, Spain, Italy, Argentina, and Peru have given Jeane much inspiration. The places she has been and people who she has met  have fueled her creativity through the years.


Having  graduated from the Academy of Art University of San Francisco, Jeane feels very fortunate for such an experience.  She learned not only how to create art but also the discipline that comes with such a profession. She is known for her long hours and meticulous  nature in creating each new piece, which can be seen by the layers of details that transform plain white canvas into original pieces of art.